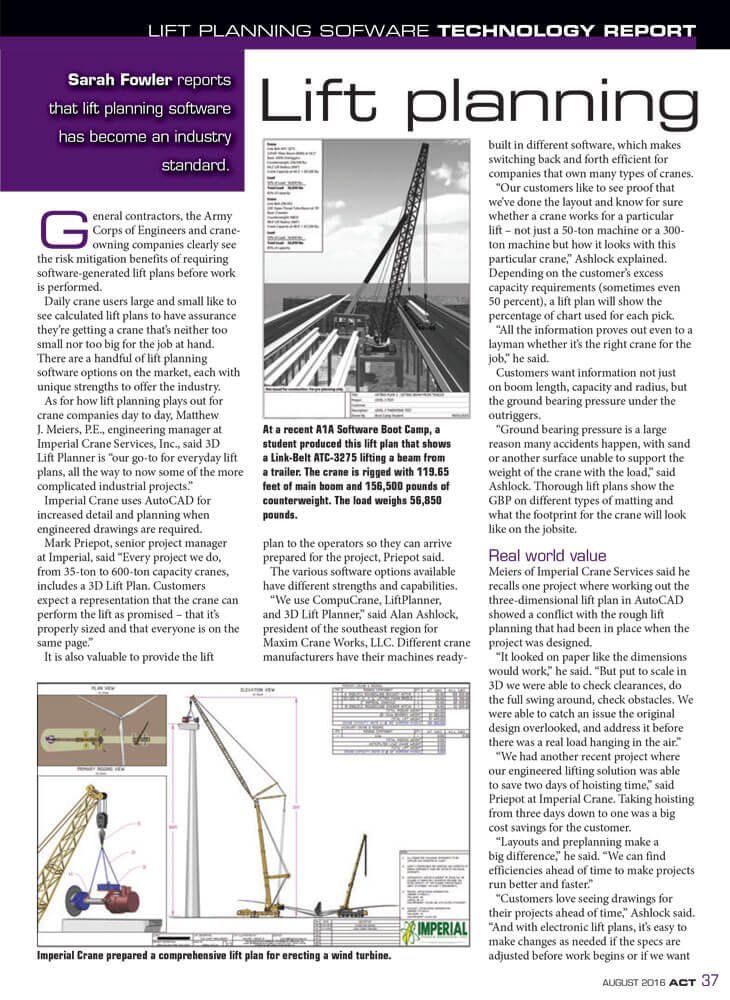 Daily crane users large and small like to see calculated lift plans to have assurance they’re getting a crane that’s neither too small nor too big for the job at hand. There are a handful of lift planning software options on the market, each with unique strengths to offer the industry.

As for how lift planning plays out for crane companies day to day, Matthew J. Meiers, P.E., engineering manager at Imperial Crane Services, Inc., said 3D Lift Planner is “our go-to for everyday lift plans, all the way to now some of the more complicated industrial projects.”

Mark Priepot, senior project manager at Imperial, said “Every project we do, from 35-ton to 600-ton capacity cranes, includes a 3D Lift Plan. Customers expect a representation that the crane can perform the lift as promised – that it’s properly sized and that everyone is on the same page.”

It is also valuable to provide the lift plan to the operators so they can arrive prepared for the project, Priepot said.

The various software options available have different strengths and capabilities.

“We use CompuCrane, LiftPlanner, and 3D Lift Planner,” said Alan Ashlock, president of the southeast region for Maxim Crane Works, LLC. Different crane manufacturers have their machines ready built in different software, which makes switching back and forth efficient for companies that own many types of cranes.

“Our customers like to see proof that we’ve done the layout and know for sure whether a crane works for a particular lift – not just a 50-ton machine or a 300- ton machine but how it looks with this particular crane,” Ashlock explained. Depending on the customer’s excess capacity requirements (sometimes even 50 percent), a lift plan will show the percentage of chart used for each pick.

“All the information proves out even to a layman whether it’s the right crane for the job,” he said.

Customers want information not just on boom length, capacity and radius, but the ground bearing pressure under the outriggers.

“Ground bearing pressure is a large reason many accidents happen, with sand or another surface unable to support the weight of the crane with the load,” said Ashlock. Thorough lift plans show the GBP on different types of matting and what the footprint for the crane will look like on the jobsite.

Meiers of Imperial Crane Services said he recalls one project where working out the three-dimensional lift plan in AutoCAD showed a conflict with the rough lift planning that had been in place when the project was designed.

“It looked on paper like the dimensions would work,” he said. “But put to scale in 3D we were able to check clearances, do the full swing around, check obstacles. We were able to catch an issue the original design overlooked, and address it before there was a real load hanging in the air.”

“We had another recent project where our engineered lifting solution was able to save two days of hoisting time,” said Priepot at Imperial Crane. Taking hoisting from three days down to one was a big cost savings for the customer.

“Layouts and preplanning make a big difference,” he said. “We can find efficiencies ahead of time to make projects run better and faster.”

“Customers love seeing drawings for their projects ahead of time,” Ashlock said. “And with electronic lift plans, it’s easy to make changes as needed if the specs are adjusted before work begins or if we want to look at alternative methods.”

Lift plans are also a factor in large project bids. As an example, Ashlock said drawings were particularly important for the unique components involved in the launch pad renovation at Cape Kennedy. Or for work at airports, where tip height is strictly limited because of flight paths. “

At Orlando International Airport, you have to choose the crane based not only on capacity at the required radius but also keep it under a 200-foot tip height,” said Ashlock. “Or we have two 600-ton hydros at the Tampa Airport. They not only have to reach far, but it’s very important that they stop them from booming up too high. All of that is worked out in lift planning in advance.”

But even some seemingly ordinary projects require a lot of lift planning.

“Every tower crane project, putting it up and taking it down, especially in a populated downtown area, shows the clearances and the crane’s footprint, necessary road closures and other unique factors,” said Ashlock.

“When comparing lift planning tools, we advise crane users to consider the ease of use, the comprehensiveness of the crane database, the level of detail and accuracy that can be achieved in producing a lift plan, and whether the end product can be used to communicate effectively with the customer,” said Tawnia Weiss, president of A1A Software LLC.

“Accuracy is the number-one most important thing to look for,” said Vilas Sankar, business development consultant for LoadXpert. “With really complex non-standard loads, not every software can handle them. It’s important that you have customization tools so it really looks like what you’re moving. You want to be able to get the most accurate, real-world application in your software.”

Jim Meehan, owner and developer at LiftPlanner Software LLC said, “I advise potential customers to select a flexible system that can grow with the diversity of projects that the company may undertake in the future.” In addition to crane and rigging planning, he said LiftPlanner software has been used for barge transport, platform trailer transport, gantry and jack-and-slide projects.

“Knowing the full range of force exerted through each outrigger or through the loading points on a crawler track has become a hot-button issue for crane owners,” she said.

The software includes the ability to show what GBP will be on steel or timber mats, and it will “soon” have engineered polymer mat data as well.

“The most appreciative LiftPlanner Software comments are about the breadth of the offering and quick customer response,” said Meehan. “The manual, video tutorials, included 3D models and modeling procedures combine to offer a strong learning path.” He noted that their customers often need to model an unusual lift. “They’ve tried applying generic lift app solutions and their clients are often critical of such efforts,” he said. “Using LiftPlanner software they are able to model their unique payload accurately and design a custom rigging assembly from the extensive rigging library.”

“Most often we hear that our customers’ favorite feature is the amount of customization we offer,” said Sankar. The software’s database feature allows saving machines to use in future designs. Customers also appreciate printouts for the loading crew and actual load calculation that provides information necessary for over-the-road permits for moving heavy vehicles or specialized loads.

“The market for lift planning software is quite strong in North America,” said Meehan of LiftPlanner Software, LLC. “Companies are devising strategies to avoid the ‘race to the bottom’ of competing solely on cost. They are seeking to add value through offering a lift planning service. This service adds to their revenue stream and helps differentiate them from the competition.”

“The construction industry is a bellwether for the economy at large,” Sankar of LoadXpert noted. “It’s been eight years since the recession. There has been ongoing urbanization of cities and a construction boom. We are happy with sales, although of course there is always growth to be had.”

“LiftPlanner also offers LiftMovie for animation of critical lifts,” said Meehan. “This is an excellent tool for breaking down a complex sequence of activities into easy-to-understand steps. It is a valuable tool for client presentations and preparing the lift team.” LiftPlanner also offers a system based on BricsCAD, which the company claims “has all the power of AutoCAD and runs on less powerful computers.”

LoadXpert, based in Canada with a strong presence in the U.S., also offers load optimization and load planning software for palletized and container loads.

So what comes next in the lift planning software world? Weiss predicts that the trend will be toward greater accessibility from mobile devices. “We are in the process of developing a Sketch Pad feature that will allow someone to use a tablet to draw on-site evaluation no