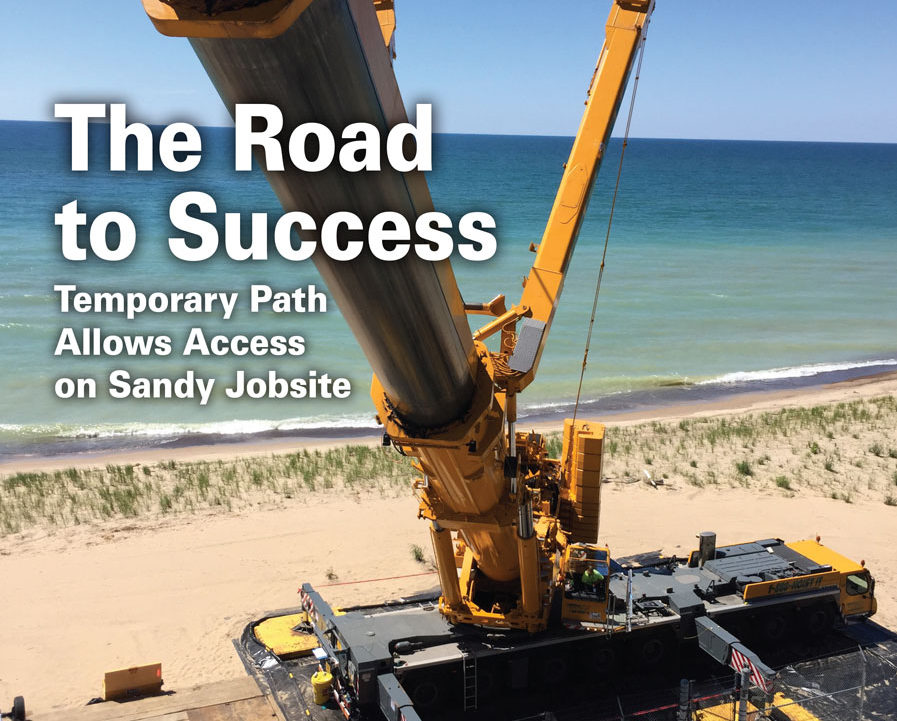 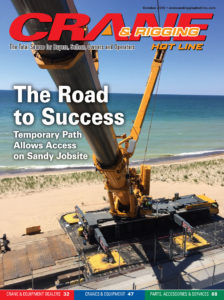 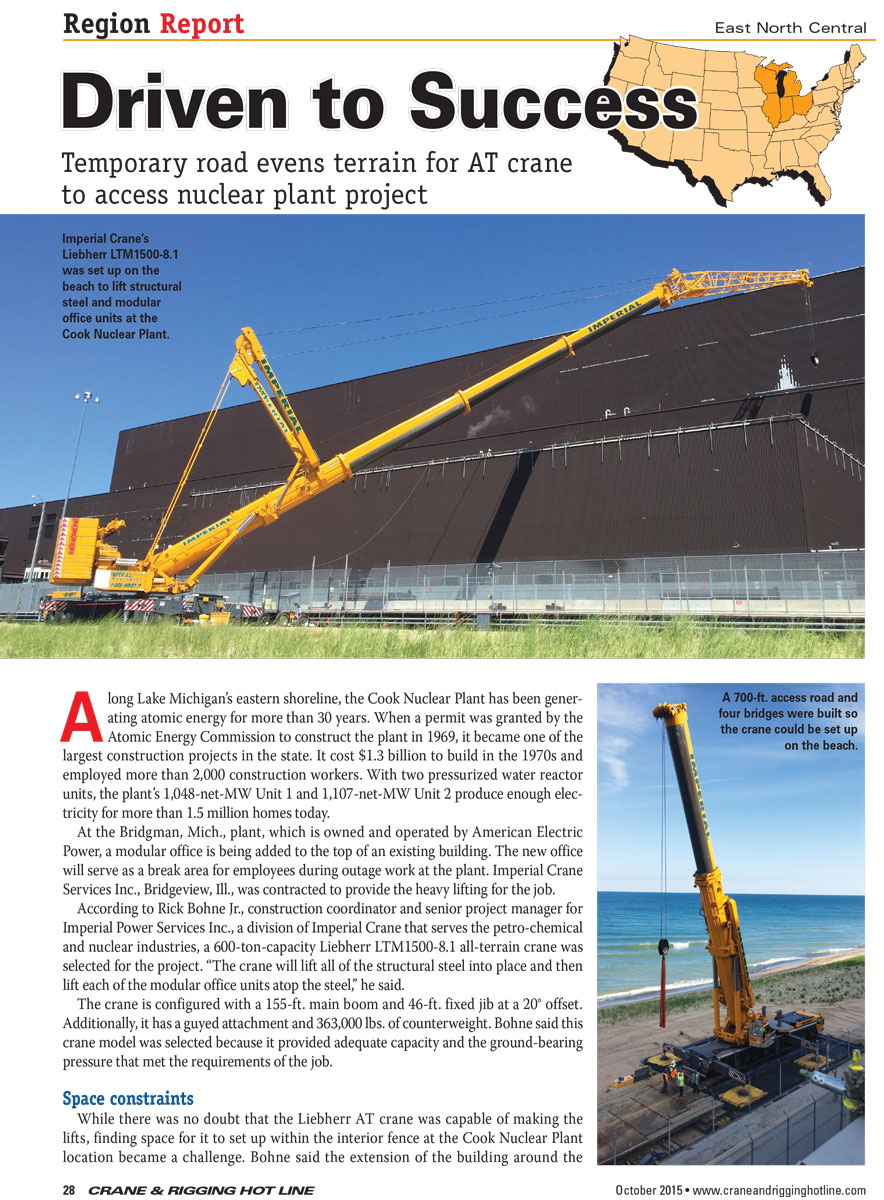 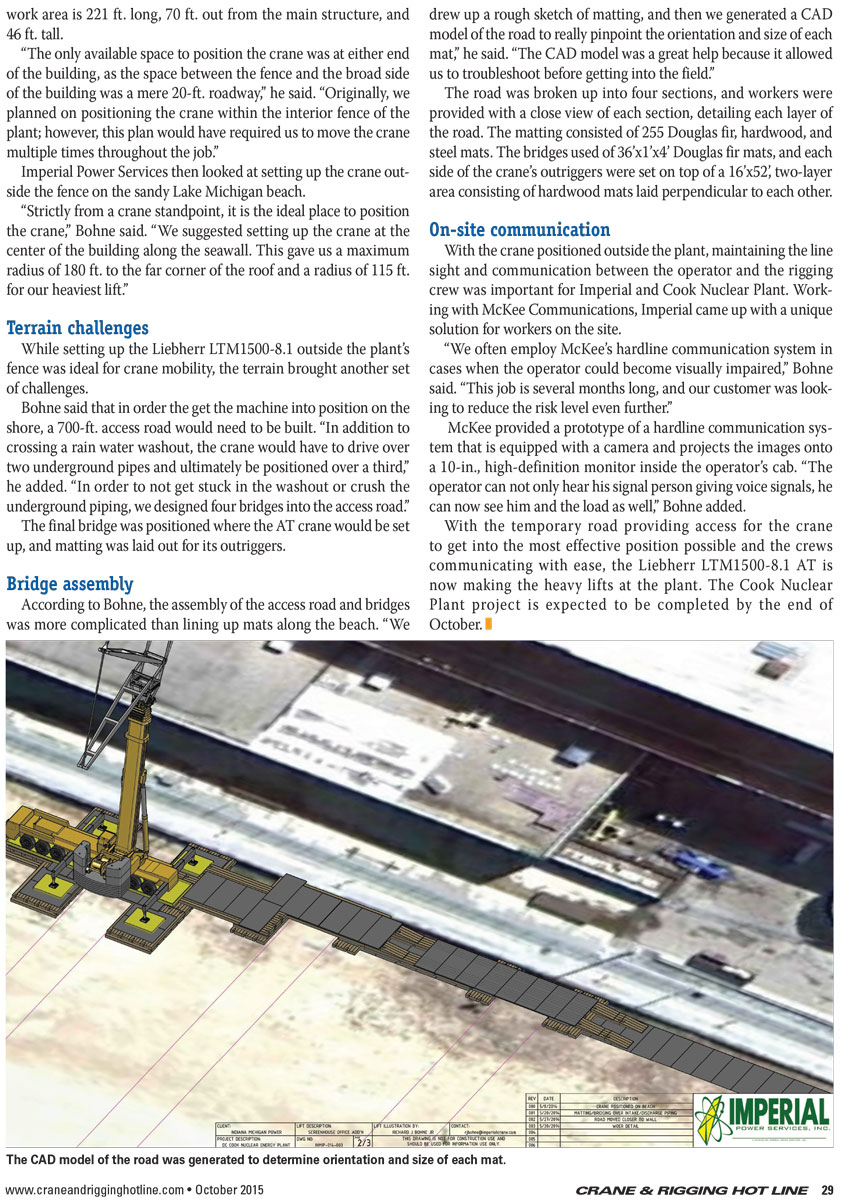 A long Lake Michigan’s eastern shoreline, the Cook Nuclear Plant has been generating atomic energy for more than 30 years. When a permit was granted by the Atomic Energy Commission to construct the plant in 1969, it became one of the largest construction projects in the state. It cost $1.3 billion to build in the 1970s and employed more than 2,000 construction workers. With two pressurized water reactor units, the plant’s 1,048-net-MW Unit 1 and 1,107-net-MW Unit 2 produce enough electricity for more than 1.5 million homes today.

At the Bridgman, Mich., plant, which is owned and operated by American Electric Power, a modular office is being added to the top of an existing building. The new office will serve as a break area for employees during outage work at the plant. Imperial Crane Services Inc., Bridgeview, Ill., was contracted to provide the heavy lifting for the job.

According to Rick Bohne Jr., construction coordinator and senior project manager for Imperial Power Services Inc., a division of Imperial Crane that serves the petro-chemical and nuclear industries, a 600-ton-capacity Liebherr LTM1500-8.1 all-terrain crane was selected for the project. “The crane will lift all of the structural steel into place and then lift each of the modular office units atop the steel,” he said.

The crane is configured with a 155-ft. main boom and 46-ft. fixed jib at a 20° offset. Additionally, it has a guyed attachment and 363,000 lbs. of counterweight. Bohne said this crane model was selected because it provided adequate capacity and the ground-bearing pressure that met the requirements of the job.

While there was no doubt that the Liebherr AT crane was capable of making the lifts, finding space for it to set up within the interior fence at the Cook Nuclear Plant location became a challenge. Bohne said the extension of the building around the work area is 221 ft. long, 70 ft. out from the main structure, and 46 ft. tall.

“The only available space to position the crane was at either end of the building, as the space between the fence and the broad side of the building was a mere 20-ft. roadway,” he said. “Originally, we planned on positioning the crane within the interior fence of the plant; however, this plan would have required us to move the crane multiple times throughout the job.”

Imperial Power Services then looked at setting up the crane outside the fence on the sandy Lake Michigan beach.

“Strictly from a crane standpoint, it is the ideal place to position the crane,” Bohne said. “We suggested setting up the crane at the center of the building along the seawall. This gave us a maximum radius of 180 ft. to the far corner of the roof and a radius of 115 ft. for our heaviest lift.”

While setting up the Liebherr LTM1500-8.1 outside the plant’s fence was ideal for crane mobility, the terrain brought another set of challenges.

Bohne said that in order the get the machine into position on the shore, a 700-ft. access road would need to be built. “In addition to crossing a rain water washout, the crane would have to drive over two underground pipes and ultimately be positioned over a third,” he added. “In order to not get stuck in the washout or crush the underground piping, we designed four bridges into the access road.”

The final bridge was positioned where the AT crane would be set up, and matting was laid out for its outriggers.

According to Bohne, the assembly of the access road and bridges was more complicated than lining up mats along the beach. “We drew up a rough sketch of matting, and then we generated a CAD model of the road to really pinpoint the orientation and size of each mat,” he said. “The CAD model was a great help because it allowed us to troubleshoot before getting into the field.”

The road was broken up into four sections, and workers were provided with a close view of each section, detailing each layer of the road. The matting consisted of 255 Douglas fir, hardwood, and steel mats. The bridges used of 36’x1’x4’ Douglas fir mats, and each side of the crane’s outriggers were set on top of a 16’x52’, two-layer area consisting of hardwood mats laid perpendicular to each other.

With the crane positioned outside the plant, maintaining the line sight and communication between the operator and the rigging crew was important for Imperial and Cook Nuclear Plant. Working with McKee Communications, Imperial came up with a unique solution for workers on the site.

“We often employ McKee’s hardline communication system in cases when the operator could become visually impaired,” Bohne said. “This job is several months long, and our customer was looking to reduce the risk level even further.”

McKee provided a prototype of a hardline communication system that is equipped with a camera and projects the images onto a 10-in., high-definition monitor inside the operator’s cab. “The operator can not only hear his signal person giving voice signals, he can now see him and the load as well,” Bohne added.

With the temporary road providing access for the crane to get into the most effective position possible and the crews communicating with ease, the Liebherr LTM1500-8.1 AT is now making the heavy lifts at the plant. The Cook Nuclear Plant project is expected to be completed by the end of October