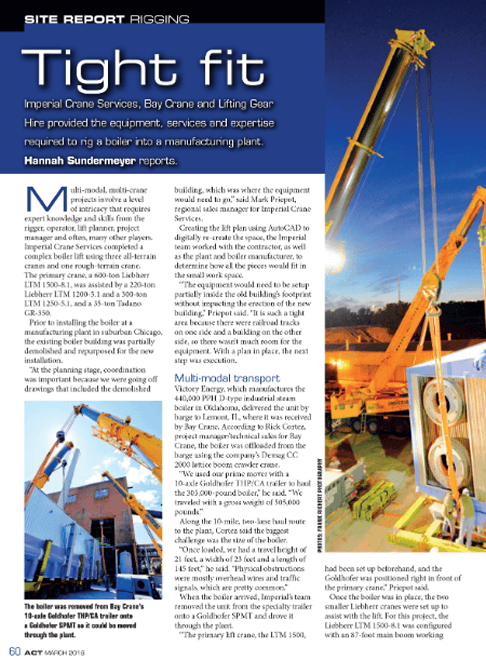 Up Close with Abraham Lincoln and the Common Man

Multi-modal, multi-crane projects involve a level of intricacy that requires expert knowledge and skills from the rigger, operator, lift planner, project manager and often, many other players. Imperial Crane Services completed a complex boiler lift using three all-terrain cranes and one rough-terrain crane. The primary crane, a 600-ton Liebherr LTM 1500-8.1, was assisted by a 220-ton Liebherr LTM 1200-5.1 and a 300-ton LTM 1250-5.1, and a 35-ton Tadano GR-350.

Prior to installing the boiler at a manufacturing plant in suburban Chicago, the existing boiler building was partially demolished and
repurposed for the new installation.

Prior to installing the boiler at a manufacturing plant in suburban Chicago, the existing boiler building was partially demolished and
repurposed for the new installation.

“At the planning stage, coordination was important because we were going off drawings that included the demolished building, which was where the equipment would need to go,” said Mark Priepot, regional sales manager for Imperial Crane Services. Creating the lift plan using AutoCAD to digitally re-create the space, the Imperial team worked with the contractor, as well as the plant and boiler manufacturer, to determine how all the pieces would fit in the small work space.

“The equipment would need to be setup partially inside the old building’s footprint without impacting the erection of the new building,” Priepot said. “It is such a tight area because there were railroad tracks on one side and a building on the other side, so there wasn’t much room for the equipment. With a plan in place, the next step was execution.

Victory Energy, which manufactures the 440,000 PPH D-type industrial steam boiler in Oklahoma, delivered the unit by barge to Lemont, IL, where it was received by Bay Crane. According to Rick Cortez, project manager/technical sales for Bay Crane, the boiler was offloaded from the barge using the company’s Demag CC 2000 lattice boom crawler crane. “We used our prime mover with a 10-axle Goldhofer THP/CA trailer to haul the 305,000-pound boiler,” he said. “We traveled with a gross weight of 505,000 pounds.”

Along the 10-mile, two-lane haul route to the plant, Cortez said the biggest challenge was the size of the boiler. “Once loaded, we had a travel height of 21 feet, a width of 23 feet and a length of 145 feet,” he said. “Physical obstructions were mostly overhead wires and traffic signals, which are pretty common.”

When the boiler arrived, Imperial’s team removed the unit from the specialty trailer onto a Goldhofer SPMT and drove it through the plant. “The primary lift crane, the LTM 1500, had been set up beforehand, and the Goldhofer was positioned right in front of the primary crane,” Priepot said.

A Tadano rough terrain crane was used to assist in removing the shipping frame and for mounting the base rails to the boiler. The Liebherr cranes lifted the boiler about 12 inches off the trailer so crews could weld and the Tadano RT could put the beams on the bottom. Priepot said this portion of the lift took most of the first day.

Once prepped, the three all-terrain cranes were back at work, hoisting the boiler. The RT was moved out of the way, and the ATs lifted the 23-foot tall and 18-foot wide boiler a little higher to rotate it from its shipping position. “It needed to be rotated upright because it was shipped on its side,” Priepot said. “The center of gravity of the load made it top-heavy, so it was deemed better to ship it on its side so it wouldn’t topple during transport.”

With the center of gravity unevenly distributed, the rigging was carefully considered to upright the boiler.

“If you know one end is heavier, then the rigging on that side will be experiencing a greater load than the rigging on the other side,” Priepot said. “You can’t just take the total amount of the load and divide it by thirds [for the three-crane lift] and call it a day. It doesn’t work like that.”

For a load that weighs 300,000 pounds, the rigging can be massive. The spreader beam used for the lift, a Modulift Mod 400/110H rented by the contractor from Lifting Gear Hire, had a capacity of 170 tons and weighed 7,500 pounds. On top of the beam, the 120-ton shackle weighed 243 pounds and the cranes were also equipped with 85-ton shackles, each weighing 137 pounds.

“The rigging itself was so heavy that we had to use the equipment on-site to put it on the crane,” Priepot said. “Just to undo the shackle to put the sling and shackle back on the beam required the use of a crane.”

Working together, the three Liebherr cranes rotated the boiler to an upright position, then the rigging was detached from the assist cranes, and they were moved out of the way. The Goldhofer SPMT was moved out, and the boiler was placed on the ground to the side. A Lull telescopic handler and the Tadano RT were brought in to install a jack-andslide system to move the boiler through an opening in the building. The rails into the building were installed, and using the LTM 1500, the boiler was placed on the jack-and-slide system.

A 75,000-pound steam drum needed to be added to the top of the boiler before final installation. It had been delivered by rail to the site a few weeks prior.

“Once it is all put together, the whole assembly was moved into the building,” Priepot said.