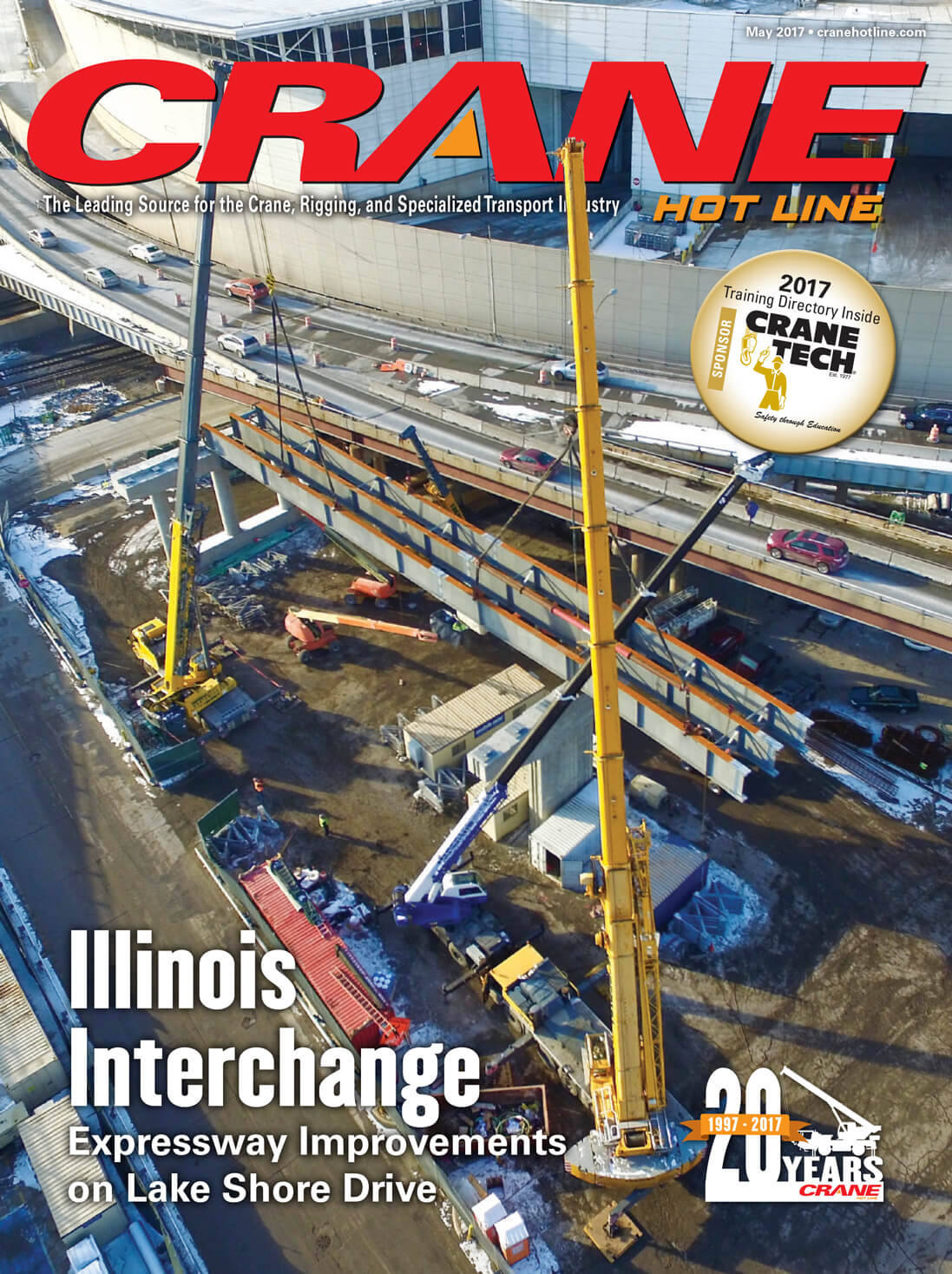 For years, the Illinois Department of Transportation patched and repaired the I-55 Stevenson Expressway at Lake Shore Drive in Chicago. At times, unplanned lane closures would halt traffic as the older structures deteriorated. On top of that, motorists using the interchange would experience regular delays due to the existing lane configurations and road-way geometry. In spring 2015, IDOT started the $130 million project to reconstruct the I-55 interchange near McCormick Place and Soldier Field, which connects traffic from the south to the Central Business District and from the north to the Loop.

Total length of the highway job is 1.1 miles and includes reconstructing six bridge structures. The work focuses mainly on bridge building, but the ramp connections also have been widened and now provide two lanes for the north to west and south to east ramps—the original ramps only carried one lane going each direction.

The work is being done in stages. In mid-February, Imperial Crane Services Inc. was on the project with a 550-ton Grove GMK7550 all-terrain crane to remove the old bridge beams and install new. Each section had five beams per bridge span, and there were three picks per span. “We picked one end-girder, which is the heavy one, and then we picked a tandem girder,” said Jeff Hejna, senior project manager for Imperial Crane Services.

The crane rental company had limited hours to work on the heavily traveled expressway, and the highway had to be operational during the day, so all lifts were performed at night between 8 pm and 5 am.

The construction also affected the Metra commuter train schedule. “We had to have special permission from Metra, which gave us a window of four hours [from 12 am to 4 am] to pull the beams down,” he said. The Regional Transportation Authority, which operates the Metra, also requires all workers on the jobsite to go through an online Metra Rails Safety course and carry a card.

Configured with 254,000 lbs. of counterweights, the GMK7550 was lifting the 75,000-lb. bridge deck beams to 137 ft. The picks required heavy-duty lifting chains and two 50-ft. endless loop round slings rated at 90,000 lbs. “We used the chains to wrap the bridge beams because we couldn’t use [synthetic slings]. It would have cut into the rigging,” Hejna said. “Then we used the endless loop slings from the chain to the hook.”

Imperial Crane selected the Grove GMK7550 for the project because its lifting capabilities and ability to fit in the limited space in the staging area. The crane was setup in between the inbound and outbound ramps, and the bridge picks were being made in the middle of the I-55 interchange with traffic continuing to move down the expressway. “There was one inbound lane closed because we had to swing over it, but other than that, it was live traffic going both ways,” he said.

Careful considerations were made to ensure the bridge beams had proper tag lines to they wouldn’t swing over the traffic. He added that they also had to be careful when picking up the beams because they crossed over the railroad tracks, and they couldn’t have any debris fall off the beams onto the tracks.
Logistically, there was only one place for the crane to work from. “With the setup area that we had, we weren’t able to get close enough to use a smaller rig,” he said. “We had to sit farther away from the bridge beam, which required this size of crane.”

Although a crawler crane would’ve easily made the heavy picks, it wasn’t an option for this job. “If we had to set up a crawler crane, then we’re talking bigger dollars and more time and manpower,” Hejna said. “It is way more cost effective to do the job by squeezing a crane in there. We cut our costs by half, at least.”
Aside from the lengthy time to set up a crawler crane, the crane would’ve blocked the road during the day. “We’d have to setup the crawler on the other side of the Metra track in the parking lot,” he said. “If we had to build the crawler on the ground then stand it up, you would need to have enough linear footage to do it, and that was the only spot for it, so it would’ve pushed the crane almost twice the distance way from where we set up the all-terrain crane.”

Located next to the construction site is McCormick Place, one of the largest event centers in Chicago. It brings in a steady stream of pedestrian and vehicle traffic through-out the year. Shutting down one of the major feeds to the center has required a lot of planning, Hejna said.

“Working with the city is always challenging,” he said. “It has its protocols, which may not transfer well to how construction needs to be done, but I think everyone sees the end goal as achievable. It’s not always the easiest path, but it’s definitely done in a way that makes sure everyone is safe.”

In other major cities like New York, particular attention has been placed on wind speed restrictions. Heavy winds off Lake Michigan have to be considered, and Hejna said Imperial Crane works off the manufacturer’s specifications, which is 23 miles per hour, but it is at the operator’s discretion in wind speeds below that. “If the operator at any point feels as though the lift is unsafe due to wind conditions, he can stop the lift at any time,” he said. “Being in a windy city, it happens.”