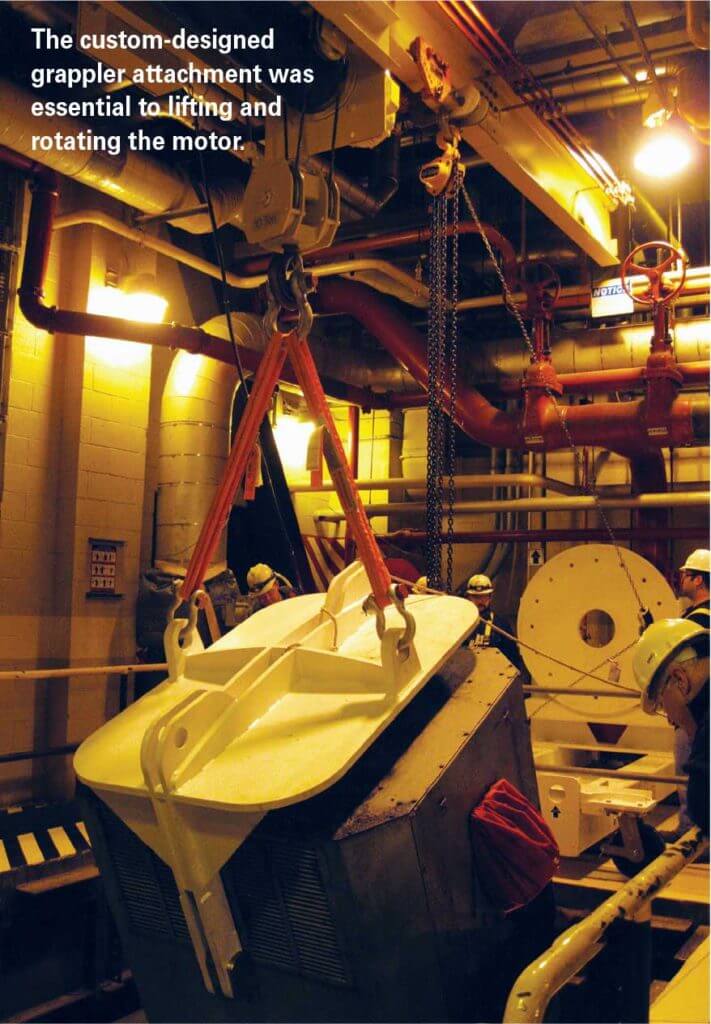 Minimizing downtime is crucial to any business, but an outage at a nuclear plant can cost millions.

When the Braidwood Generating Station in northeast Illinois serviced its heater drain motors, the complicated removal procedure was time consuming and took the motors out of commission for weeks. After the plant acquired a new backup motor, a more efficient process was developed for its removal—and a new rigging device was designed in the process.

The original motors were required to be disassembled before they could be taken out of the facility. This included removing the covers and ancillary equipment, which took several days.

The core of the motor would then be lifted by an overhead crane through an opening in the floor and placed on a cart to be guided through and taken out of the plant. The motor had to be disassembled, rebuilt, and tested each time it left the facility for service, as well as when it was returned to the plant.

Not only did the process take time, but service crews had to maintain quality control by keeping track of hundreds of screws that were removed from the shrouds and make sure metal shavings or paint chips did not fall inside the motor.

In 2015, the nuclear plant acquired a new replacement motor, which was a vertical model that was configured differently than its predecessor and could not be disassembled. A new process was needed to remove the motor during plant outages. Imperial Power Services and DMS Motor Services LLC worked together with Exelon, owner of the Braidwood plant, to determine the best method.

“We started planning several weeks ahead of time,” Bohne Jr. said. “We went to the site and [found that] one of the issues was the new motor, which could not be disassembled, also did not fit the existing cart. Once it was taken out of service, it would have to be laid down horizontally on the cart and pushed through the plant to the crane bay.”

However, Fielding said the motor isn’t typically turned on its side. “The bearings and rotating element inside the motor hang like a pendulum, which is held with a delicate bearing,” he said.

The team determined it would need to secure the rotating element in the motor, develop a rigging apparatus to lift and place the motor, and design a new transport cart to push the motor through the building.

“We had an idea in our minds what the products would be,” Bohne Jr. said. Bohne Sr. was instrumental in conceptualizing the product ideas. The next challenge was bringing them to life.

Using Autodesk Inventor mechanical design and 3D CAD software to simulate the design, Fielding developed the new equipment to move the motor through the plant. A rigging apparatus called the “grappler” that bolts to the existing lifting lugs on the motor would be used to secure the motor’s rotation element, turn it on its side, and push it through the plant horizontally.

According to Zych, the grappler “is a legitimate lifting device, even though it was designed for this purpose.” With Inventor, the grappler was built to scale and tested to the ASME B30.26 Rigging Hardware standard.

“[Fielding] was able to tell the computer what grade of steel it was made of, where the welds are, simulate the load moments, and understand where the weaknesses and strengths are,” Bohne Jr. said. “He knew before we did the physical pull test and fabrication that the design was of sound practice and was going to work.”

In addition to the grappler, two carts were fabricated by DMS to move the motor into and out of the plant. “The carts are actually a means to get the motor from vertical to horizontal on both sides of the plant,” Zych said.

Once the products were designed, the engineering and production staff at the nuclear facility ensured that they also met standards set by the nuclear industry. “We planned it so they would accept [the equipment] without having to compromise their standards,” Bohne Jr. said.

Before the lift took place, Imperial Power Services illustrated each step of the proposed move with its lift planning software. To ensure that it would work, the team also did a test run with a mock motor and cart using PVC pipe and wooden 2x4s.

Fielding said there were high-pressure steam lines and control panels that could dismantle the plant if they were bumped into, so the rigging job had to be precise.

“We pushed [the mock cart] through the plant and anything we needed to move, we documented it so we knew exactly how it would fit,” Zych said. “We squeaked by with a quarter-inch of clearance in some spots.” Once the trial run was marked as a success, it was time for the real deal. To lift and move the new motor into and out of the facility, Imperial employed a 10-ton capacity hoist and gear beam trolley; a 12.5-ton load cell; a 4-ft., 21,200-lb. capacity endless roundsling; 17-ton capacity shackles; a chainfall; and the two carts.

On the lower level where the motor was located, the cart was put into position, and the grappler was attached to the existing lifting points on the motor before it was hoisted up and lowered onto the cart.

With the motor in a horizontal position, it was secured with locking pins, and the rigging was removed from the hoist and grappler. The cart was rolled into position and turned 180° so the grappler lifting eyes were now pointed in a different direction and centered under the overhead crane. From there, the hoist upended the motor and lifted it through an opening in the floor overhead. The motor was brought to the edge of the floor opening in the vertical position, and a chain fall was used to hoist up the end to bring the motor to horizontal. It was then moved toward the second cart where it was lowered and secured to the flange before being pushed out of the facility.

“We had to push it about 800 ft., zig zagging through the pipes in the facility,” Bohne Jr. said. In total, Fielding said it took 53 minutes to make the lift happen—a drastic reduction in time, compared to the multi-day moves of the previous motor.

Bohne Jr. noted the biggest advantage of the new removal process at the Braidwood Generating Plant was eliminating the time spent taking apart and putting the motor back together.

“We took a 28-day evolution from start to finish, and we knocked it down to about 10 days,” he said. “Anything you can do to make it quicker is a sheer savings to the plant.”

Fielding anticipated the Braidwood facility would save millions of dollars from the time savings, due to its more efficient solution for moving the motors during every outage.

“We took a 28-day evolution from start to finish, and we knocked it down to about 10 days.”New process advantages